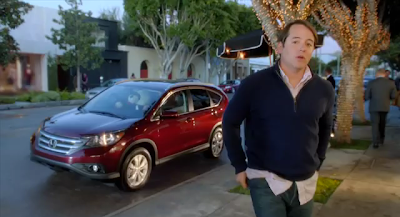 Car commercials were always kind of a "who's-who" of famous actors doing voiceovers. Did you know James Spader's been the voice of Acura commercials for years? Jeff Bridges has been lending his to Hyundai ads too. And the voice of Mercedes-Benz? That's Jon Hamm, or, as most people might recognize him, Don Draper from "Mad Men." And Draper's partner on the show Roger Sterling (John Slattery) spent the early part of last year posing in Lincoln ads.

Don't you find it pretty pathetic that, first off, Matthew Broderick is in a Honda ad? And advertising a CR-V, no less. It's not a bad car at all, but it's a microwave compared to a Swiss Army knife like a Jeep Grand Cherokee. There's a reason everyone's parents have one: It's as practical as elastic pants. And those aren't cool at all. And second, is this the car anyone thought Ferris Bueller would be driving? Not at all. Maybe Cameron, but certainly not Ferris.

Gawker's automotive blog Jalopnik has taken serious offense to Ferris being used this way, calling it "sacrilege" on Monday. And they're right. This ad is just weird. I don't know how many people were actually fooled by the illusion of a "Ferris Bueller" sequel, but I feel bad for you. I feel like Honda just made the sequel: Ferris turns into an actor named Matthew Broderick. The end, really.

Honda's other division, Acura, did something much more interesting, however. Instead of getting James Spader out of "The Office," they got Jerry Seinfeld out of ... um ... whatever he's doing right now and put him in their two-minute Super Bowl spot with Jay Leno. Two car guys in one spot? I'd watch that.

The only thing not-quite-right with the Acura ad is that it's for the NSX Concept, which, while jaw-droppingly gorgeous, isn't here for another two or three years. Acura could have been trying to sell existing models, some of which desperately need a sales boost, stat. (RL, ZDX, I'm looking at you.)

Something tells me the Super Bowl car commercials this year aren't going to stand up quite as well to last year's stars, like the chilling Chrysler 200 one with Eminem. Unless Volkswagen pulls a rabbit out of their hat to beat last year's li'l Darth Vader Passat promo, that is. Judging by the barking dogs ad, VW could be headed in the right direction.

Unlike Honda. Poor Ferris. Why isn't Cameron around to kick this CR-V into some trees?