Confession #61: The loss of Top Gear as I know it stings like the loss of a show about gays 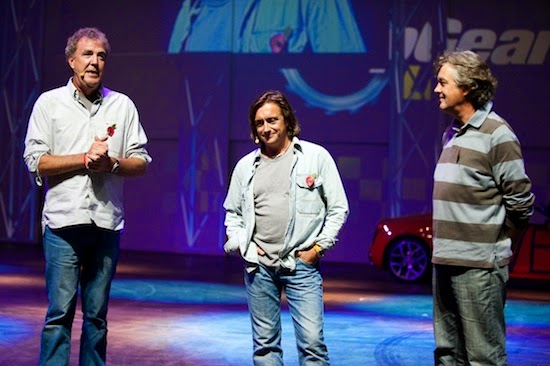 I hesitate to write about Jeremy Clarkson. There was something inevitable about his lashing out and subsequent firing from the BBC and Top Gear. But the fact the effective end of the car show as I was introduced to it came almost at the same time as the cancellation of Looking, the show I loved to hate. And suddenly, two shows I loved were done.


Looking was boring as hell but struck this painful chord just at the wrong time. The second season, I thought, was legitimately good dramedy TV. It was talking about relevant gay relationship issues, issues that are marginalized on other shows if they're talked about at all. Plenty of critics, good writers, complained it was too boring and demanded more – or something more representative of gays who didn't live in San Francisco. But Looking added something to the TV landscape. Not perfect, but definitely representative of something that wasn't represented at the time. I'm sad to see it reduced to an HBO movie rather than being given another season to find itself (and hopefully free of Kevin).

Top Gear is just different. Jeremy Clarkson is the world's oldest toddler, a diva as someone I saw call him. He got a way with far too much at the BBC. But trying to revive Top Gear without him didn't work in the past, and it won't work again.

I'll never forget when I discovered Top Gear. It was a YouTube clip of their disastrous caravan trip and I mentioned it to a friend at school who was an even bigger fan at the time. After watching lots of pedantic clips and reading emotionless stories about cars and, crucially, why we all like cars.

Crucially, Top Gear made me feel like it was OK to talk about cars with people who didn't know/care/like cars. It was just good TV, entertaining on a number of levels. Which a far broader audience can get comfortable with. The chemistry Clarkson, Richard Hammond and James May had is rare, and the production values were great full stop. There were celebrities in terrible cars, talking about cars. It didn't matter if you weren't typically a fan of cars, British shows or "manly" talk shows – Top Gear evolved into something for everyone.


At least until it became a show about middle-aged guys blowing shit up. Which is tiring after a while. Or middle-aged guys talking about how Britain used to be great. It would've been just as bad if they kept talking about how America was great. The less Top Gear became about insightful commentary about cars, the less relevant it became. And the more Clarkson became known for his archaic statements about Mexicans and gays and other nations, the more embarrassed I became for blindly being a fan of his show. Plenty of us car fans grew tired of Clarkson, but persisted because this was the best or only car show. We should've demanded better. We should've demanded better of Clarkson.

I never quit watching, but I was surprised when Top Gear did an hour about the love of cars, rather than the love of caveman habits. The ride has ended and Top Gear will never again be the Top Gear I fell in love with. I was ready for that.


And I can live with that, because I have my memories about how the wit and chemistry of Clarkson, Hammond and May gave me the confidence to write about cars in a way that I'd like to read – not how those who have mechanical knowledge like to, the way some auto writers think we should all be producing work like we write technical manuals. Some of us like to write about the car culture, the way cars make us feel and the way they've affected our lives.

Thanks to the many ways work can be published and distributed today, I'm confident we'll have another Top Gear, with great hosts and a great writing staff and great production. It'll be different, but not necessarily worse. Just like a successor to Looking will happen one day, I can wait for a new car show to change my life.
at 10:49 PM